Thanks to the wonderful people at Coca Cola, I got a chance to be a part of the Hearts and Hands Gala in Atlanta benefiting the Ronald McDonald House. For those of you who don’t know what the Ronald McDonald House is all about, you’re gonna love it! The RMH is all about family. They help families address their problems regarding health care. Whether those problems involve how to stay near and support a hospitalized child, how to afford staying together in another city while a child is undergoing treatment, or even getting basic medical and dental care in an under-served community. To find out more about what they do and how you can help, visit http://rmhc.org/. 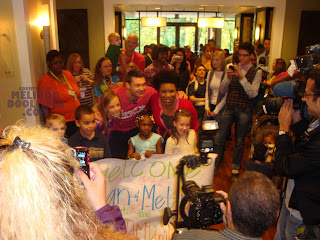 Saturday started with the most amazing visit to the brand new RMH in Atlanta. This is my 3rd visit to one of the houses in different cities and this one was spectacular! They really work so hard to keep the “home” atmosphere and still meet the needs of the children and their families. Now, I do have to admit, I was excited about going to the house for two reasons. First, I LOVE getting to hang with the families. They are such strong and amazing people. Secondly, Ryan Seacrest. Ryan was hosting the Gala that evening, so we were both going to visit the house that morning. He’s seriously one of my favorite people! That being said, the families totally outdid Ryan that day. I had so much fun meeting all of them. The children were so precious...and just as excited about Ryan as I was. :-) I met the most loving boy named Christopher, who had already experienced 24 brain surgeries. Then, I met my little friend David, who just had a liver transplant and had the cutest cheeks ever! 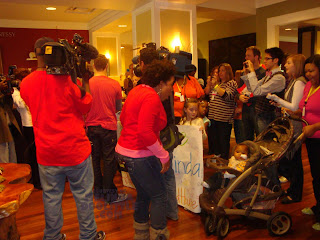 The underlying theme with all of the children and their families was their strength. They loved being with other families experiencing the same thing. It was awesome to see the strength they provided for each other. I can’t finish telling you about this visit without telling you about my new friend Forrest, though. I fell in love with this little boy the moment I saw him. I asked to hold him and I was hooked! He is 7 months, but the size of a 2 month old because he was born so prematurely. He is so loving and precious and I pretty much didn’t let him go for the whole visit. His mommy, Haven, was sweet enough to let him be my therapy for the day. :-) 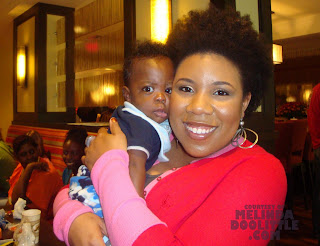 Before we left, we got a tour of the gorgeous home and got to see firsthand what is offered to each family. It was so amazing! I was so excited to be a part of something so wonderful. It really hit home with me. I hope you can find out more about the houses in your area and see what you can do to help. I must mention that I also had a new friend with me during the tour. Her name is Aubrey! It really made it special for me to see the house through a sweet child’s eyes. She was the icing on the cake for me. 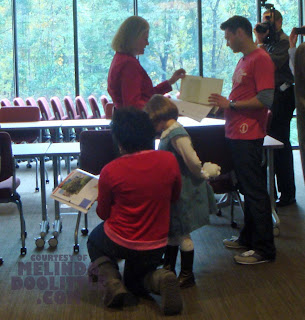 At the end of the day, we ended up at a beautiful Gala outside of the World of Coca Cola. If you haven’t visited that place, you really should. It’s amazing! Of course, Ryan was the perfect host and I had a blast singing. The fact that I had my manager and my background singers with me made it even more special! Thank you Kelley, Janet and Jaimee for making this such a wonderful experience and for being a part of making a difference in the lives of these children and their families.
***A special thank you to The Atlanta Ronald McDonald House, Coca Cola and Ryan Seacrest...and Forrest!

posted by Melinda Doolittle at 7:51 AM 6 Comments

Enter at your own risk...

This week has been full of hours of meetings/discussions that I'm sure you guys will be excited about once announced! However, they have caused my brain to become mush at night. I seriously have a hard time concentrating on anything. Case in point, I've been writing these first four sentences for about 20 minutes now. I've had 2 Capri Suns, some yummy almonds and I tried to watch Glee but I kept rewinding it because I would miss something even though I was staring at the screen. Has that ever happened to you? I mean seriously, I'm not even sure what I set out to actually write about in this blog. So, naturally, I've decided to ramble about random things. Which, in retrospect, is not really any different from any of my other blogs. So you should feel right at home. Here we go...

1st Question: What is the most random or embarrassing thing you've done to or in front of someone you look up to?
***My moment was when I met Quincy Jones! I was so excited and then the moment he was in front of me all I could do was cry. Not a cute cry...a scrunch your face up and streak your makeup cry. By the time I sorta got myself together, I was still too scared to talk to him about music, so I overheard him talking about food and commenced to have a full conversation with him on the many ways to enjoy sweet potatoes. I'm pretty much hoping he doesn't remember that.

2nd Question: If you could pick one day...just ONE...to do over again, what day would it be?
***My day would be the day this girl pulled my hair and knocked my books out of my hand in the hallway in the 7th grade. It made me so mad that I kicked her really hard and then I ran away! If I had to do it all over again...I wouldn't have run. Just kidding! I wouldn't have kicked her...so hard. Okay, seriously, I wouldn't have let her get to me that way. I'm not a fan of letting someone else determine your reaction. Then they win.

Last Question: If you could be any 3 characters from the movies or TV, who would you be?
***I would be...
Claire Huxtable (Cosby Show)- I must...MUST...marry Cliff. All non-Cliff types need not apply. :-)
Anne Shirley (Anne of Green Gables)- I'm pretty sure I'm already as dramatic as she is, so it's really not that much of a stretch, but I absolutely LOVE her imagination!
Jack Bauer (24)- Yes, I do realize he's a man. However, he seems to know everything and I find that quite appealing. He also can find out any info about anyone, which completely feeds into my nosy nature. Lastly, he's stealth...who doesn't want to be stealth?!

I had a great birthday week of celebration and family! However, that means I'm just now catching up on everything that happened...very interesting! Here's what I gather:

Simon Cowell turned 50, Barbra Streisand broke records with her new #1 CD (on a side note: she also announced that she loves wearing elastic waistbands...love her!), Kourtney Kardashian is having a boy, Heidi Klum and Seal had a baby girl, Chicago lost the 2012 Olympic Bid (sad), President Obama won a Nobel Peace Prize (amazing), Suri Cruise had some ice cream, but most shocking? Miley Cyrus has left Twitter! What the world??? Let's discuss...

Obviously, Twitter has become one of the hugest phenomenons ever! But why? For me, it's because I'm incredibly nosy! :-) I want to know what my friends are doing, where they are and what they think about current events. Heck, I want to know what everybody is doing. A site like Twitter is perfect for me (don't even get me started on TweetDeck)!

So, my first instinct when I read about Miley leaving the site was "WHY?!?!" I really didn't get it. What could possibly be the problem? Then I read her explanation. I started to think about her life. Can you imagine EVERY aspect of your life being scrutinized and ridiculed? Everything she says and does is judged. That can't be fun. Then she joins this great new site, excited about letting people in on the real Miley and she still gets criticized. What do you do with that? Her biggest complaint was not having any privacy. I mean, she gets followed everywhere she goes and that just goes along with being her, so why would she want to add to that? So, while I totally think her reasoning is valid, I would love to offer another solution: Limit what you tweet about. People can only find out what you choose to divulge. There's no rule that says you have to tweet 20 times a day and it all needs to be ultra personal.

As a matter of fact, now would be a good time to talk about things that should be off limit for EVERYBODY on twitter (I promise I've seen all of these).

1. Bodily excretions
2. Your PMS schedule
3. Play by play of your bathroom visits
4. Your spouse's indiscretions
5. Your breakup fight with your significant other

PS - Does anyone ever sit forever trying to figure out how to tweet your message in 140 characters or less? Not saying it's hard for me or anything. I was just thinking someone else may have that struggle. :-)


***Let me know what your thought are on this topic. Also, give me some more Tweeting no-no's.

posted by Melinda Doolittle at 11:50 AM 13 Comments