So, sometimes I discover random things that I see as life changing...you may see as crazy, but to each his own, right?! Here we go!

1. Did you know that they now make gummy multi-vitamins for adults??? It has changed my life! You know how the normal multi-vitamins are so huge? They normally gag me, but now there is a solution! Yay! The key is to NOT eat the whole bottle in one day. They're so good! I have to hide the bottle from myself sometimes. Is there such a thing as too many vitamins in your system? :-)

2. Did you know that they make summer onesies?
***Onesie (1-z): pajamas or everyday wear (your choice) with feet in them and a great pocket up front to hold your cell phone.***
Well, most of them are this soft, velvety material that is perfect for the winter months, but there are also those that are like a thin thermal shirt...perfect for the warmer months! I writing this blog in my summer onesie right now (and yes, I do know that summer is now officially over). Woot! Check out pajamacity.com if you want your own. 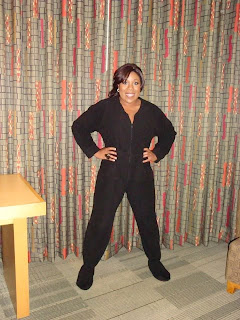 3. In the midst of all of the "Real Housewives of Wherever" shows, there is a show about Househusbands. It's called "Househusband of Hollywood". I find this show very interesting. So, these are households where the wife is the main bread winner and the husbands are in charge of the house. I think it's kinda cool to see the guys step up to the challenge. It can be kinda touchy sometimes, but I think the show handles it well. It even takes the time to define "manly" words so that we ladies can better understand the gentlemen. I've personally learned an invaluable lesson about the importance of man caves.

4. Did you know that the guy that wrote, directed and starred in "In The Heights" on Broadway was the rapping psych patient on the season premiere of House? I was so excited because I absolutely LOVED "In The Heights" when I saw it and I thought he was pure genius. If you don't know about it, look up Lin-Manuel Miranda at www.intheheightsmusical.com.

5. The jury is in and an Afro is easier than a wig! :-) Don't get me wrong, I love my wigs and this is definitely not the end for them. I've just found something easy, fun and ME! I've always braided my hair under my wigs and kept it from any chemical or straighteners, so that I would know it was healthy. Truth be told, I was afraid of trying to manage it for a while there until I just decided to try it one day and I fell in love. So, now you get to see my natural hair. (I say that like it's an honor...hehehe)
***Note to self: Never be afraid to rock the real you! It's always easier than you think and it's so worth it in the long run :-)*** 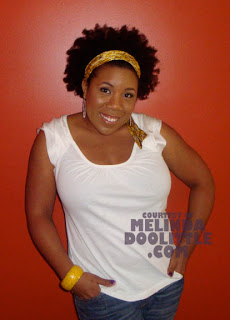 WHAT HAVE YOU DISCOVERED LATELY???

posted by Melinda Doolittle at 9:30 AM 17 Comments

Now, most people took that as pure excitement...I meant it as pure shock. I have no idea how it's going to work out. I hope, for the sake of such an amazing show like American Idol, that it works perfectly. No matter how much I miss Paula, I still want AI to continue to offer huge opportunities to dreamers for years to come.
***Let me say this first...Paula cannot be replaced. It can't and won't happen.***
So, what if we stopped thinking about Ellen as a replacement and we started seeing her as an addition to the show???

Here are my thoughts about Ellen...I absolutely love her! I think she's hilarious and caring and that's a great combination. My first time meeting Ellen was the night we did Idol Gives Back on Season 6. I seriously have never met a bigger celebrity fan of the show! She knew everything about all of us and actually took some time to give us some insight on how to deal with the wonderful AND the awful things that were being said about us on a daily basis. It was priceless to have someone like her take the time to prepare us for what was ahead.

I keep reading about people saying she has no musical background. This is my response to that...Ellen seems to love everything there is about music. It moves her, it makes her happy. She is also an avid fan of the show. This means that she perfectly represents most of the viewers of American Idol! These are the voices that ultimately make the decision of who stays and who goes on the show. These aren't always artists or skilled musicians. These are people that love the show and love music. So, why is that ok and Ellen is not? Just a question.

So...we wait and see how it turns out. At the end of the day, you get to agree or disagree as you always have. I, for one, am a fan of success, so I want to see it work out well for everyone involved. I know, I'm a sap. :-)

posted by Melinda Doolittle at 8:19 AM 7 Comments

So...Football season is on!!! This Thursday marks the season opener and what better way to open the season than to watch my Titans beat down the Steelers?!?!
If you can't tell by now, my favorite NFL team is the Tennessee Titans! I love them and I always will!

A little history for ya: I learned what I know about football by being the mascot at Union High School my senior year. I was on the sidelines for every game that year and I got hooked!
***In other news...I just got back from singing at my high school's opening game this season (WE WON!). Details very soon! :-)***

Since high school, I have been a huge fan of the game. I sometimes have weird reasons for picking which teams I like and don't like though.

Example 1: While in high school, my favorite color was forest green, so I liked the Packers, plus Brett Favre is cute. My favorite color is now black and I am NOT a Raiders fan, so that one's out.

Example 2: I once watched an interview with the Cowboys and they came across so cocky that I refused to be a fan. (After last season, this rule goes for the Steelers too!) Not that they didn't have reason to be. My second reason for not being a fan was that they were always beating teams I really liked. Emmitt Smith almost won me over when he was on Dancing With the Stars, but I attributed his sweet personality to the fact that he had gotten far away from him Cowboy ties. Hehehe...

Example 3: I love underdogs and Shayne Graham...therefore I like the Bengals. Have you guys seen the HBO show Hard Knocks: Training Camp? I think it's a brilliant show. It shows the training process of the Bengals after having a really rough season last year. I have been hooked. It's a crazy game and an even crazier training process. I will be riveted to their season just because I want to see these players turn things around. Plus OchoCinco is hilarious...a little bit off...but hilarious!

Example 4: The only truly normal reasons I have for loving a team...they're amazing and they represent home to me. That's my Titans!!! I'm so excited about our new roster and I can't wait to make it to the Super Bowl this season. It's on, y'all and I'm happy about it!


Now, that being said, I have a little wager for ya. On the Melinda's Backups site, there is a football pool for a good cause. Here's the deal...sign up for the football pool, make a small donation and not only do you get to TRY (notice I said TRY) to beat me in the pool, but you are also a part of creating a music scholarship to Belmont University for a deserving student. Now, IF (notice I said IF) you win, you will also get a call from me, but don't plan on winning. I plan on beating all of you this season. Please sign up because I want to have major bragging rights, so that means I need to beat a lot of people. So, who's in??? http://www.melindasbackups.com/football

*Try to get in by Thursday so you don't miss the 1st game. But if you're late, I think they may throw out the lowest week, so you just have to bring it in the coming weeks. :-)